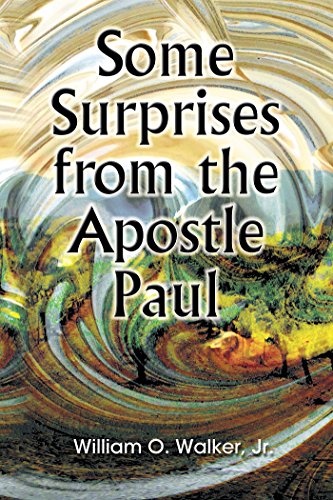 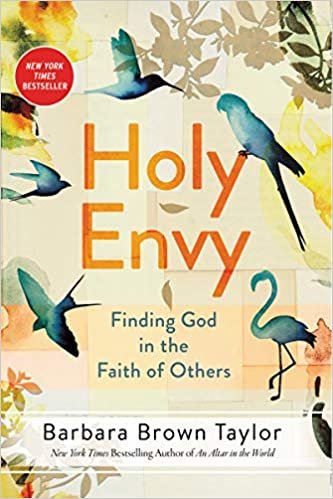 In “Holy Envy”, Barbara Brown Taylor writes about her many years of experience teaching Religion 101, World Religions, as an introductory religion course at a small private college in northern Georgia. Her course covers Christianity, Judaism, Islam, Hinduism and Buddhism, leaving out a huge number of other, smaller religions. The book title refers to characteristics of religions other than her own Christianity that cause her envy. As an ordained Episcopal Priest with years of leading local parishes, she has a perhaps too solid foundation in her own religion. Seeing others, and teaching them to college students has shown her a new view of how religions can and should work in the world.

This is not my usual content for study books, as you can easily see by looking through this website. It was recommended by one of our readers and will be a good book for our group to work on over a Zoom connection while we shelter in place awaiting the end of the COVID-19 virus pandemic. At least we won’t be killing each other between computer screens as we might have done sitting next to each other in a small living room. Another difference in this book study is that we will be using a study guide by SmallGroupGuides.com rather than my usual questions. I want to see what kind of difference this makes. 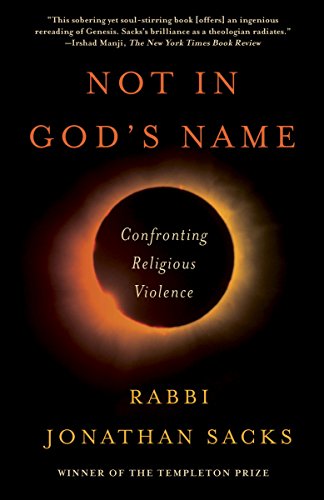 Not In God's Name

In this powerful and timely book, one of the most admired and authoritative religious leaders of our time tackles the phenomenon of religious extremism and violence committed in the name of God. If religion is perceived as being part of the problem, Rabbi Sacks argues, then it must also form part of the solution. When religion becomes a zero-sum conceit—that is, my religion is the only right path to God, therefore your religion is by definition wrong—and individuals are motivated by what Rabbi Sacks calls “altruistic evil,” violence between peoples of different beliefs appears to be the only natural outcome.

But through an exploration of the roots of violence and its relationship to religion, and employing groundbreaking biblical analysis and interpretation, Rabbi Sacks shows that religiously inspired violence has as its source misreadings of biblical texts at the heart of all three Abrahamic faiths. By looking anew at the book of Genesis, with its foundational stories of Judaism, Christianity, and Islam, Rabbi Sacks offers a radical rereading of many of the Bible’s seminal stories of sibling rivalry: Cain and Abel, Isaac and Ishmael, Jacob and Esau, Joseph and his brothers, Rachel and Leah.

“Abraham himself,” writes Rabbi Sacks, “sought to be a blessing to others regardless of their faith. That idea, ignored for many of the intervening centuries, remains the simplest definition of Abrahamic faith. It is not our task to conquer or convert the world or enforce uniformity of belief. It is our task to be a blessing to the world. The use of religion for political ends is not righteousness but idolatry . . . To invoke God to justify violence against the innocent is not an act of sanctity but of sacrilege.” Here is an eloquent call for people of goodwill from all faiths and none to stand together, confront the religious extremism that threatens to destroy us, and declare: Not in God’s Name. 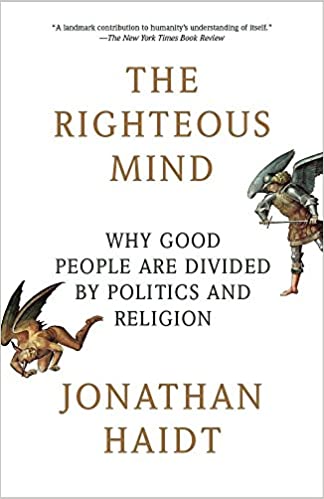 On September 11, 2012, Pastor Lee Neish invited folks to the parsonage for a discussion of Jonathan Haidt’s book “The Righteous Mind”. Half a dozen of us participated in a lively and interesting discussion that just touched the surface of the ideas in this fascinating book about why it is so hard for liberal and conservative people to talk seriously with each other. One reason for choosing this book is that I’ve come across references to it in many other books I’ve been reading recently.

As America descends deeper into polarization and paralysis, social psychologist Jonathan Haidt has done the seemingly impossible - challenged conventional thinking about morality, politics, and religion in a way that speaks to everyone on the political spectrum. Drawing on his twenty five years of groundbreaking research on moral psychology, he shows how moral judgments arise not from reason but from gut feelings. He shows why liberals, conservatives, and libertarians have such different intuitions about right and wrong, and he shows why each side is actually right about many of its central concerns. In this subtle yet accessible book, Haidt gives you the key to understanding the miracle of human cooperation, as well as the curse of our eternal divisions and conflicts. If you’re ready to trade in anger for understanding, read The Righteous Mind.